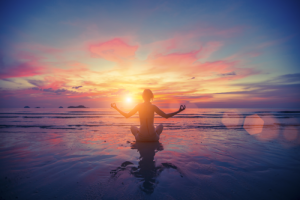 Sanskrit is the primary language of Hinduism and is commonly used in yoga to define poses and practices. Here are a few of the most common Sanskrit words you may hear during yoga class, along with their meanings:

Asana: Literally translated, the word means “seat,” but in yoga class it is used to refer to whatever yoga “pose” you are in. For example, Child’s pose is Balasana and Boat pose is Navasana.

Om: When spoken (pronounced using the sounds of the letters A-U-M), the sound is referred to as the sound of the universe. Om is all about threes, and the written version is commonly seen on yoga studio walls, tattoos, charms and more. It means we are all part of this universe and one with all parts of this universe – constantly flowing, changing, breathing, and moving. When chanting Om, you are zoning in on that constant movement.